Back to all posts

The search for sullen sounds

Don't let the title of the blog post fool you. I'm not that much of a drag to be around. That being said, this album I'm about to record is full of dark imagery and requires a certain atmosphere to bring these stories to life. I've been listening to a wide variety of music ranging from Nick Cave's 1996 album Murder Ballads, to underappreciated folk singer Vashti Bunyan to the soundtrack to the recent horror film The Witch. When I saw The Witch I was struck by the visceral, truly bone-chilling effects that composer Mark Korven was able to summon with instruments such as the Swedish nyckelharpa, which is a bowed instrument much like a violin, but also employs the use of keys which gives it a distinctive, percussive sound.


He also used a waterphone which is a is a type of 'inharmonic acoustic percussion instrument consisting of a stainless steel resonator bowl or pan with a cylindrical neck and bronze rods of different lengths and diameters around the rim of the bowl. The resonator may contain a small amount of water giving the waterphone a vibrant ethereal sound that has appeared in movie soundtracks, record albums, and live performances.'

I also really like the sombre tone of a harmonium, which is essentially a portable pump organ.


Below are images and links to sounds of all the aforementioned instruments. I doubt I'll be able to gain access to some of these for my record, but the sounds certainly inspired the direction for some of the songs on this album. Hope you enjoy them.

Waterphone - starts getting creepy at the 1:02 mark. 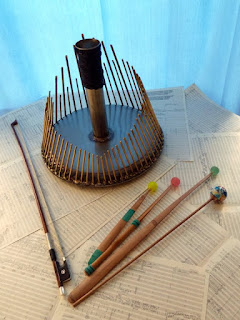 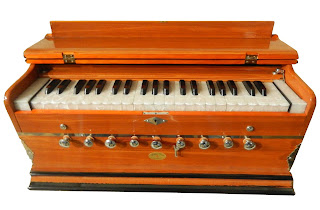